Home / About Our Firm 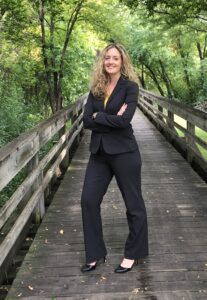 Nicole was born and raised into humble roots in Sioux Falls and is a first generation lawyer in her family. Her father grew up in a family of farmers, and her mother grew up in a family focused on business. Nicole’s family ingrained in her at a young age the importance of working hard and she brings those values of never giving up to her cases both in and out of the courtroom. Her practice  consists of strategic critical thinking, compassionate guidance, and zealous advocacy.

After graduating from high school in Sioux Falls, Nicole attended University of South Dakota for undergraduate liberal arts degree with a major in Criminal Justice and minor in English. She realized from a young age, she had a passion and drive to advocate for others, and pursued law school in Charlotte, NC on scholarship. In law school Nicole was active as Editor-in-Chief of her law school newspaper, Vice President of Family Law Society, and Vice President of Advocates for Justice. Nicole graduated law school in only 2.5 years. She was able to spend her last semester visiting at a top 20 law school, University of Minnesota School of Law, where she was able to meet an inspiring female lawyer, the late US Supreme Court Justice Ruth Bader Ginsburg.  Before opening her own law office in spring 2018, Nicole gained extensive experience working from 2013-2018 for 5 different law firms in North Carolina, Minnesota and South Dakota.

In addition to litigating full time and owning her own business, Nicole has always thrived on giving back to the community. She regularly sits as a volunteer Judge through the Sioux Empire Teen Court program, and advocates on the Community Accountability Board–both youth diversion programs in the Sioux Falls area to keep teens from having a record for first time petty offenses. Outside of the Griese Law Firm, Nicole spends her free time running, spending time with her husband and son at the lake,  reading leisurely, and binge-watching Netflix. 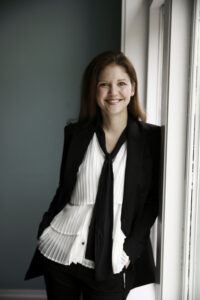 Morgan was raised on her family’s farm in Gayville, SD, and graduated from Vermillion High School in 2011. Morgan studied English Writing at South Dakota State University, graduating with Honors in 2015. Before attending law school, Morgan worked as a Technical Writer for Daktronics while teaching English Composition as a Graduate Teaching Assistant and taking English graduate courses at South Dakota State University. After years of encouragement, Morgan attended the University of South Dakota School of Law in 2017.

While in law school, Morgan was a member of the Moot Court Board and worked as a Graduate Assistant for the University of South Dakota Office of General Counsel. During her final year of law school, Morgan won the Best Oral Advocate award at two competitions: Frank A. Schreck Gaming Law Moot Court Competition hosted by the University of Nevada-Las Vegas William S. Boyyd School of Law, and the Region 14 – New York City Bar Moot Court Competition hosted in Minneapolis, Minnesota.

Before joining the Griese Law Firm, Morgan interned for the State of South Dakota’s Governor’s Office and for Marlow, Woodward, and Huff, where she also practiced as an associate attorney upon graduation. Morgan’s late father always imagined Morgan would practice law, so one of Morgan’s favorite memories is seeing how proud he was at her law school graduation ceremony in 2020.

Now, Morgan is a proud resident of Sioux Falls with her Himilayan cat, Lou. In her free time, Morgan enjoys trying new restaurants with her family and friends and boating with her family’s English Bulldog, Gus.

Sheila was raised on a dairy farm in rural Parker, South Dakota. She graduated from Parker High School in 2006. In 2008, she graduated from Colorado Technical University with an associate’s degree in Medical Assisting. She worked as a Health Unit Coordinator at Avera Hospital ICU but later decided that the medical field was not for her. In 2011, she started back at Colorado Technical University and was unsure what she wanted to do but took a Paralegal Studies course and fell in love. She later graduated from Colorado Tech with a Bachelor’s Degree in Paralegal Studies.

Sheila was a legal assistant at Eich Law Office in Parker and Hartford for five years before joining the Griese Law team in March of 2020. Sheila lives in Chancellor, SD with her husband Dan, their four children Layla, Layne, Lawson Londynn, and the newest addition to the family their chihuahua spaniel dog Brulee.

Sheila spends nearly all of her free time driving her kids to their various sporting events and cheering them on from the sidelines. She also loves spending time with her kids and taking them on various adventures such as the pool, walks, & visiting the family farm.

To get directions to this location, click "Directions" or "View larger map" on the map below (Google Maps will open in a new window).